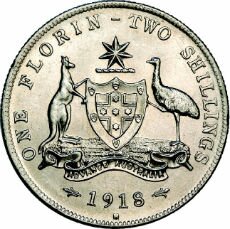 If you are looking for coin values in Australia vpcoins can provide sound valuations for a range of old and new coins. To gauge a coin's value you must consider four key factors - scarcity, mintage, condition and desirability.

Scarcity: Can be caused by a number of reasons besides low mintage. Some coins are scarcer these days despite high mintages as they were initially ignored as a collectible because there were so many available, astute collectors have savoured the better quality coins and hidden them away in their  collections making them less readily available, so you end up with a glut of well used / low grade specimens but not many better quality coins available making the coin more valuable. Some coins are scarcer in some states than others. A good example of this is the 1939 ½ penny Roo is more common in Queensland than the southern states probably due to the majority of them being released in Queensland. Another example is the 1934-5 Melbourne Centenary florin. The initial mintage was 75,000 with 21,000 later being melted down leaving a mintage of only 54,000.

Mintage: Varies due to the need for more of a particular coin. Generally coins are minted and distributed based on need. If there are plenty of a particular coin in circulation and in holding at the reserve bank then production will be decreased or halted until stocks dictate the need for more to be minted. Low mintages generally make for a more valuable coin, logically the less available the harder to obtain and the higher the price.

Condition: Condition has a great bearing on a coins value. A coin can be plentiful in poor condition and trade at silver value or slightly higher. The same coin can be scarce or rare in high grade and command a premium price. When dealing with rare and scarce coins even a half grade variation can make a big difference in value of hundreds and sometimes thousands of dollars. Note* You should always collect the highest grade your budget will allow. The theory behind this is that if you have a rare coin, or banknote for that matter, that has increased in value by 4% over the past year than a coin valued at $1,000 will provide a better return than a coin valued at $500

Desirability: The one thing that can't be measured, well not scientifically or mathematically anyway. We can measure it by knowing that everyone wants one so I really want one too! As a comparison example the 1930 penny with an estimated mintage of 2,00 to 3,000 is known or been heard of by almost every Australian even if they don't collect coins. The 1930 penny is listed in the McDonalds 2013-14 price guide at $25,000 in fine condition. Compare this to the 1922-21 overdate threepence. Most people outside pre decimal coin collectors probably haven't heard of this coin, it's mintage is only 900 coins and McDonalds price guide lists it in fine condition at only $16,000. The 1930 penny is famous and desirable and is more valuable due to it's desirability.

It's not all about old or pre decimal coins either. There are some modern issues that for various reasons are rare, scarce and highly sought after. The 1972 5 cent comes to mind. Mintage figures for the 5 cent coin between 1966 and 1984 range between 25.1 million and 139.4 million EXCEPT for the 1972 issue whit a tiny mintage of 8.2 million. Even in circulated condition this coin has a retail value of a couple of dollars. The 1966 wavy base 20 cent is another modern that now commands over $2,000 in uncirculated condition.
The staff at vpcoins have the knowledge and experience to be able to give informed advice regarding all your collecting needs and coin values.
Click here to contact us if you are in need of information regarding coin values in Australia.